A quick word about how this group build came about…. 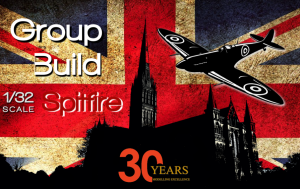 As an avid reader of modelling magazines, both in print and online, back in 2009 I had come across several glowing reviews of this new “wonder kit” from Tamiya – a Mk IX Spitfire in 1:32 scale.
Although it was not my “usual thing”, I wanted one – and badgered my poor wife for weeks, telling her that it was all I wanted for Christmas that year….
After the initial excitement of opening the box and examining the contents, time eroded my enthusiasm – I’m not really that bothered about Spitfires (I prefer Hurricanes…) – it was the wrong scale to fit with most of my other models and, of course, it didn’t fly with the Navy.
11 years later and fellow club member Phil told me how much he wanted a Tamiya Spit. I came very close to offering him mine, but felt bad about parting with the gift that I had nagged my wife to buy for me.
What I needed was an incentive to build it!
Phil agreed to my suggestion that, if he acquired a kit, we could build them at the same time – I’m sure he needs no incentive to build his, but it was just what I needed to make a start on mine.
And being members of a model club, it seemed only right to extend that invitation to all…