I have to admit, I find the construction of the underparts of cars rather boring, so I jumped right into the interior. Actually, this isn’t such a bad thing as I will be dry fitting the interior to the chassis and the body panels often to check alignment- a crucial thing in getting a good finish on any car. 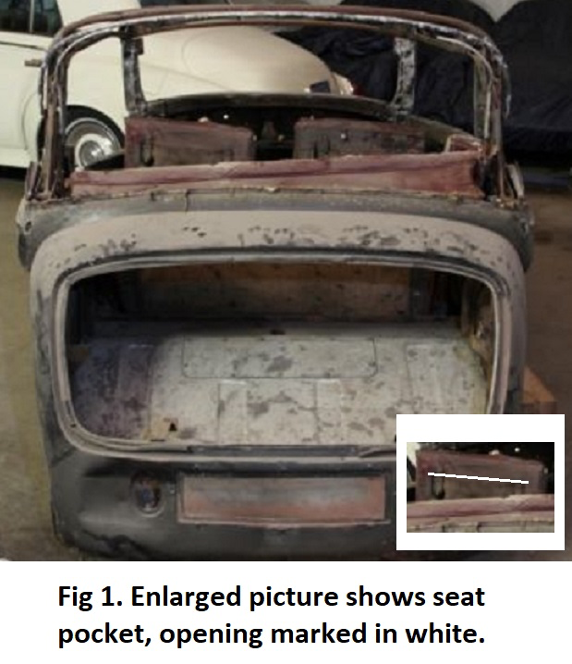 Modern pictures of 540s show many different interior finishes, and it is surprising how many 540ks are still out there as well as replicas. All the pictures of the WWII vehicles I have come across are black and white but it could be gleaned from these that dark interiors are the norm and would be expected. While black would be a safe choice I found a picture of an old 540k being restored that had its original interior panels laid out. These are in an Ox Blood red that really suits the leather and would be the colour I chose. Everything on the interior minus the dashboard was constructed, leaving off the door window winders and gear stick from the body tub. I made both driving and passenger front seats up but did not glue them in place on the tub floor so I could remove them easily.  With Green stuff, a two part putty from Army painter I detailed the rear of the front seats to have pockets with elasticated tops as this detail was missing and is apparent in some pictures of the car. The kit has blank backs to each seat and some modern 540’s have blank backs. Others have nets. It also varies if the car has a flip up grab handle. I used the same pictures of an old restoration to choose the version I would be following as no WWII picture showed the detail I was looking for and most post restoration pictures were to a high standard that probably exceeds the original specification. Fig 1

The real vehicle would only have been 3 or so years old, not the 60 years plus that the restorations I looked at were, but I must admit the faded look of the Ox Blood interior on the restoration was just how I wanted the leather to appear.  (fig 2) After priming in black I initially airbrushed a red oxide onto the seats letting the black show through in the recesses of each cushion.  Then with a very fine brush I cross hatched a diluted lighter tan red over the high points and wear areas of the seat leather to age it. Finally, a satin varnish was dry brushed over the high spots and a little tan pigment rubbed into the creases.  The same colour palate was used on the door side walls and other leather areas such as arm rests and map pockets. (fig 2, 3 and 4) 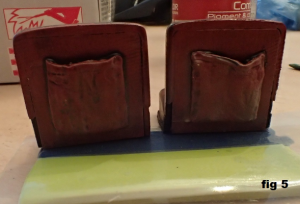 In one of the pockets on back of the front seats I put some maps printed of at home that were approx’ 1/35 but once folded up were undeterminable in scale.  One purely whimsical item I added in the pockets was easy to make, a length of plastic rod painted black with gold ends was stuck protruding out. Field Marshalls carry a baton but I don’t expect that would have been considered necessary in the field, more a ceremonial thing and thus left in the car. Fig 5 shows the seat back under construction after receiving paint sat on the un-mixed ‘Green Stuff’ putty.

Other pre painting done as soon as I opened the box was a spray of Panzer grey over all the body panels. I used Model Master spray paint from a can and was not too impressed. Rather than a light covering of fine spray it splattered a bit leaving some drop marks that needed polishing out. I went back to the ever-reliable Tamiya spray cans for putting a duller silver over most of the chromed parts. I left the interior handles in chrome and fitted these once the seat was painted and installed. 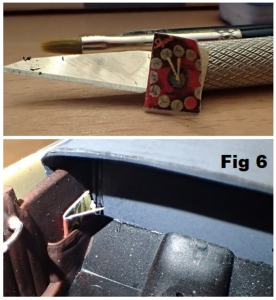 Near the foot wells on each side are pockets which are almost invisible once the body top and windscreen are fitted. As every car I have ever owned gets stuff shoved in these pockets I decided to add a copy of the German propaganda magazine ‘Signal’.  I made up one by printing off some covers with are taken from Ebay adverts. The cut up paper sheet seemed the right size and I curled the pages once folded into each other.  As the pockets were only moulded in place by Italeri I then chopped it down to appear as if inserted and fixed with a drop of PVA.  While I’m pretty happy how this little detail turned out I’m sure you Nazi propaganda experts will have all realised the cover on the magazine is from issue 17 of 1944. How stupid of me!  The car is modelled on how it appears spring  1942, what an obvious error. (fig 6) Thank goodness it’s hardly visible once built.

I’ll wait before sticking the front seats in place or adding the steering etc as I think a driver is needed.  But for now that will do.