I promised in my last instalment to deal with any figures separately; in part due to finding figures a more challenging (read difficult) aspect of the hobby. However, figures are an important element to any build as they give a sense of scale and help contextualise the model. Also, this instalment would seem the ideal place to discuss Field Marshal Bock as it is his Mercedes 540k in the spring of ’42 on the Russian front that I have decided to base my build on. I will not be making a model of the Field Marshal only the driver and a standing figure as if the two are sharing a conversation while the driver is waiting for the Field Marshal and his entourage to return from visiting the frontline. But I must apologise in advance of your reading as this will be a long article that bounces from research to speculation and onto modelling. I hope it makes for interest. 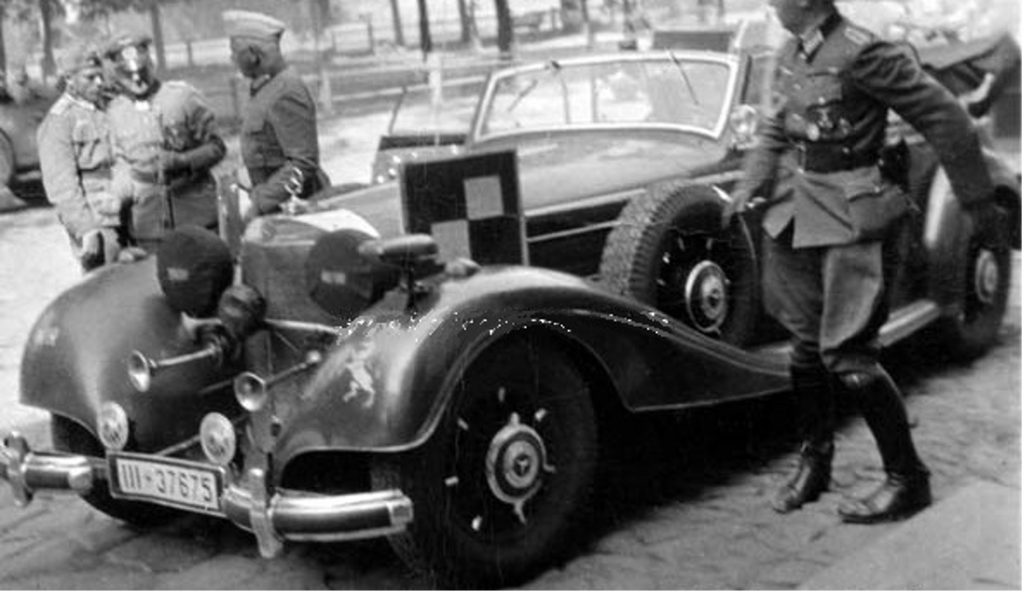 I mentioned in the intro article that good references of Walter von Reichenau’s 540k were available but due to his conduct I didn’t want to portray his car.  Reichenau died in Russia while being evacuated by air after suffering a heart attack late January 1942. He was replaced by Field Marshal Fedor von Bock as commander of Army Group South. An older soldier who’d served in the Reichswehr during WWI and then achieved success in WWII in Poland (1939), in the Western Blitz Krieg (1940) and then in the invasion of Russia (1941), It was during the 2nd major German effort in Southern Russia that he was given command of Army Group South taking over on the 20th January 1942. By the 9th of July that year Hitler removed him from command  for disagreeing with his decision to spilt the German forces. Bock never held command again and remained at home until the end of the war.  He was killed during an RAF air strike four days before the end of hostilities. 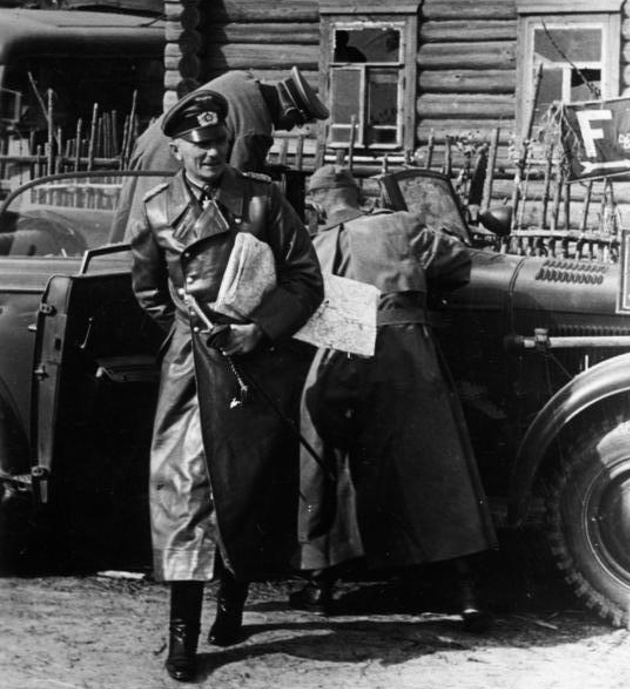 I was happy that Field Marshal Bock would have likely been driven in the same Mercedes 540k that Walter von Reichenau would have had at his disposal, the vehicle staying on in theatre. The next problem was identifying the markings on the fenders. The ‘WH’ was simple – Wehrmacht, but the white horse initially had me stumped. I’d looked through unit emblems for the white horse seen on the left front fender and after finding nothing investigated possible coat of arms, concentrating on the idea of ‘Westphalia’ as that coat of arms has a white horse. That was a dead end but during that avenue of investigation I discovered 2 motifs and the units that the motifs belonged too. The problem though is working how either of these units could be linked to Reichenau or Bock.

The prancing horse was the emblem of the 254 Infantry Div. Part of 18th Army. From my research Reichenau has never served with 18th Army. He had been in command over 10th Army and 6th Army, Bock had also been in command of 6th Army when in command appointment of Army Group South during operation Barbarossa. That seems to be the link.  The 6th Army has a prancing horse symbol albeit much more stylised. Therefore, speculation and evidence combined meant I had a plausible reason to match the photo of 37675, the VRN I’d also be using.

While none of the proceeding has led to a jot of modelling, it needed doing as in some ways I had too much reference material that was preventing me confidently moving forward. 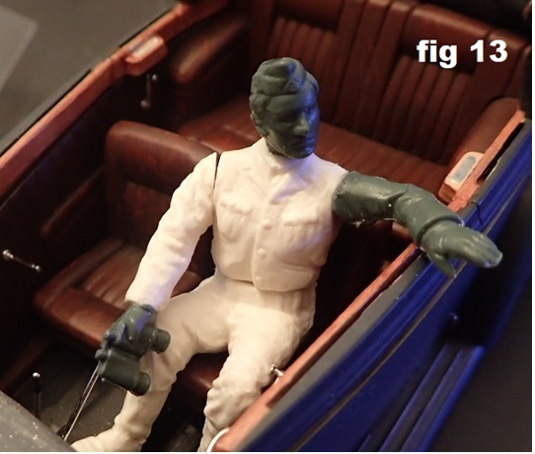 The figure could not be put off. To attach the driver’s seat and the re-worked dashboard and get a realistic fit to the driver meant building them all at the same time and doing a lot of dry fitting. Fig 13 shows that the driver would be looking out of the car and his knee rested into the door panel. I had to carefully fit his legs around the gear stick on one side and under the windscreen winder on the other. His left arm would be hanging over the windowsill as he converses with another soldier. This would be done by mix and matching body parts and then using Milliput to flesh out the areas needing detail. 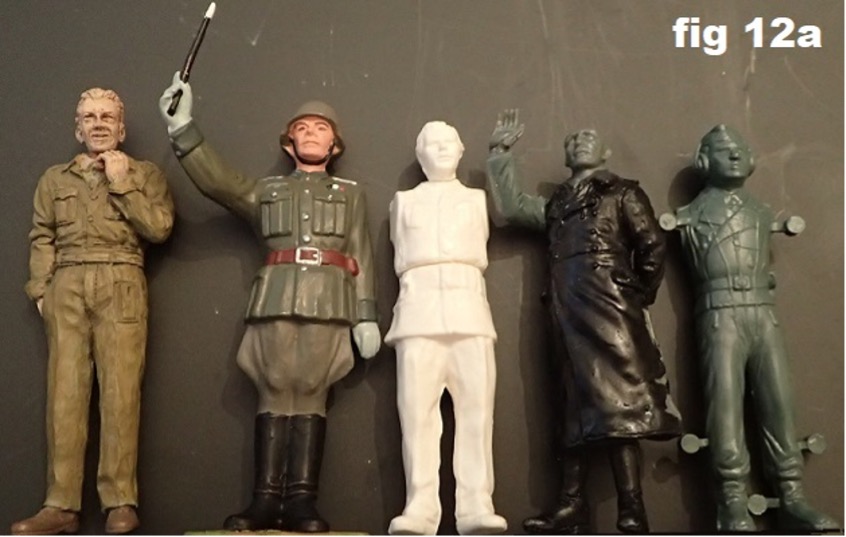 Fig 12a shows my first hurdle. Military figures in 1/24th are not plentiful and it became apparent that 1/25 and 1/24th are interchanged with little thought. The far right figure is a Tamiya 1/25 which as expected is the smallest figure yet the body parts are bulky in comparison. The far left figure is a resin 1/24th. As can be seen in Fig 12b even supposedly same scale bodies can be widely different and not just due to the variations in height real humans have. The resin 1/24th figure is back-to-back with a Revell 1/24th mannequin.

I started out with a 1/24 Revell fire engine driver as the cut of the jacket was similar to WWII German uniform. Gloved hands and the head with side cap came from the bulky 1/25th Tamiya figure. I chose this head for it’s size but regret it now. Of all the heads in my stash these older Tamiya figures have the most basic of detail and painting the face was a repeated exercise to try and get some sort of realistic expression. Using white Milliput (which I painted brown to make visible in the photo’s – your welcome) I added the jacket’s top and bottom pockets, epaulets, collar, badges and some bulk and creases under the left arm and over the boot tops, as well as filling small gaps left from changing the figures position. The binoculars rest on his knee in a relaxed fashion- the image I was after was a bored driver observing the area being interrupted by a nosey infantryman striking up a conversation- typical in fact of military life. (fig 14) 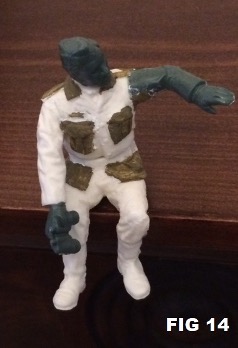 Painting was done in acrylics over a black enamel primer base. As I highlighted the figure uniform it became too light, and while I know German field grey varied much in colour and tone, it seemed too faded, not in keeping with a Field marshal’s driver.

I repainted the field grey areas and wet blended the darker areas with tank grey. Once dry a lightly dry brush on field grey lightened with silver grey, this brought out the highlights less vigorously than before. I then used a black wash to pick out the pockets and collars. The gloves are Revell tan with a gloss brown wash to pick out details and give a leather look. Light dry brushing of matt beige on the fingers simulated the wear leather gets. A lot of details had to be painted on like the button badge on the cap and the ribbon on the jacket- modern figures have this sort of detail moulded which makes life much easier. I did his hair with some elements of grey as I imagined this soldier to be more senior in age. With that in mind and after some research I gave him a Specialist Drivers badge and a Cuff Ribbon. While Cuff Ribbons are common in WWII at the time of my model 6th Army were not wearing a Title. However I was able to get round this by issuing my driver a WWI veterans ‘Rhein’ cuff title (Rhein Nationalsozialistischer Reichskriegerbund Chapter) that was granted to soldiers who had already served in WWI.