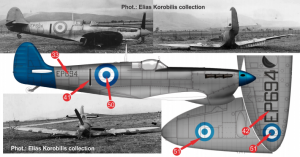 The Royal Hellenic Air force (RHAF) received its first spitfire MkV fighters during late 1943. These were issued to the RAF’s two Hellenic squadrons fighting in N. Africa, 335 and 336. The two squadrons later moved to Italy from where missions over occupied Greece and the Balkans were also flown. The two squadrons returned to Greece in late 1944.
Most spitfires used by the RHAF were finished in the “Day fighter scheme” with dark green and ocean grey for the top surfaces and medium sea grey for the lower surfaces. A small number of aircraft seem to have been finished in the “Desert scheme” with dark earth and mid stone for the upper surfaces and azure blue for the lower surfaces. British national markings were carried according to RAF regulations. Hellenic national insignia did not begin to be used before the two squadrons’ repatriation, but even then not universally as the aircraft were still officially property of the RAF. The aircraft were gradually handed over to Greece, this process lasting well into 1946. The fuselage insignia were the first to be changed usually by overpainting the red center circle in blue. Wing roundels remained British for longer and in many cases a complete set of Hellenic insignia was not applied before 1946, leading to many interesting variations and marking mixes!

After being handed over to the RHAF the aircraft were gradually repainted and remarked, although their finishes were still far from uniform. The aircraft continued to be used operationally during the 1945 – 1949 Hellenic Civil War and also continued in service into the 1950s.

Ioannis’ Journey will be revealed below: