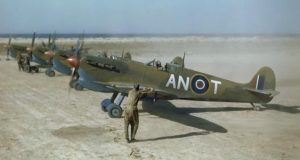 417 Squadron was a Royal Canadian Air Force squadron formed in England on 27 November 1941 at RAF Charmy Down and was known as the “City of Windsor” squadron. It was equipped with the Hurricane and later the Spitfire. It was initially deployed in Egypt and followed the allied advance through the western desert. With the defeat of axis forces in North Africa, the squadron followed the advance through Italy. It disbanded in Italy on 1 July 1945.

John’s Journey will be revealed below: