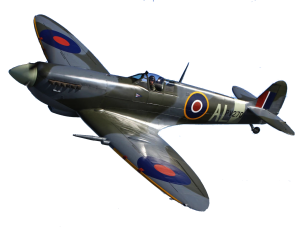 Operational aircraft required camouflage to make them less visible from above in flight and on the ground. The first Spitfires to go into service were painted with a pattern of Dark Earth and Dark Green on top of the wings and on the upper fuselage. This was designed to break up the aircraft¹s profile. However, to make it easy for anti-aircraft artillery batteries to identify friendly fighters, the underside of the early Spitfires was painted half black, half white, along a dividing line from nose to tail ­ although sometimes the whole of the fuselage underside was white. Later on, the entire underside was painted light blue Sky, duck-egg blue or light grey to make the aircraft less visible from below during dogfights.

There were several other paint schemes for specialist variants. Reconnaissance Spitfires, which carried cameras to photograph enemy territory, were stripped of guns and other non-essential equipment, streamlined so they could fly as high and fast as possible, and painted with special camouflage. High-altitude reconnaissance aircraft were painted medium PR (photo reconnaissance) blue overall. Surprisingly, low-level reconnaissance aircraft were often painted light pink. This unusual colour was chosen because it would hide the aircraft at sunset and sunrise, when a background of low cloud takes on a pinkish hue, but it proved to work almost as well during full daylight. Aircraft that fought on the North African front would be given desert camouflage and night fighters were painted all-black.

For general service aircraft stationed in Britain, prewar regulations dating back to October 1937 set out the layout of camouflage pattern for each type flown by the RAF. Single-engined, single-seater, monoplane fighters, such as the Spitfire, were allocated two standard patterns for the Dark Earth and Dark Green camouflage. These were dubbed A and B camouflage, and were mirror images of each other. Factories generally applied the A pattern to aircraft with odd serial numbers, and used the B for even ones. This practice was confirmed by official Air Ministry orders in 1939, although the different aircraft manufacturers sometimes applied the rules inconsistently. 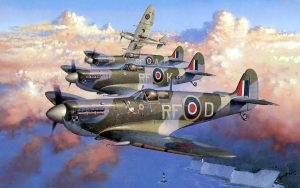 The underside and propeller spinner were painted brown, and green camouflage was applied to Spitfires throughout the Battle of Britain and into the first half of 1941. However, when RAF policy switched to attacking enemy installations in Belgium and France, its aircraft had to fly across the Channel or North Sea, where the brown areas of camouflage stood out against the waves. Because of this, on 15 August 1941, the Air Ministry ordered areas of Dark Earth camouflage to be changed to dark Ocean Grey, as a scheme of grey and green proved to work equally well over land or sea. Sky paint was retained for the spinner and the fuselage band near the tail, while a thin yellow strip was added along the leading edge of the wing to aid recognition. New aircraft received this paint scheme in the factory.

Operational aircraft were repainted in the field, or as they went through repair depots, but with a shortage of the new paint meant that colours might have to be mixed up from available stock. Some aircraft were painted with Dark Sea Grey or an improvised alternative produced by mixing Night and White.

The RAF’s identifying Type A roundel, consisting of concentric red, white and blue circles, was painted on the underside of the wings and the sides of the fuselage. To help those on the fuselage stand out from the camouflage scheme, they were surrounded by a narrow yellow ring, and the result was called the Type A1 roundel. Roundels on the top of the wing only had the red and blue discs (Type B roundels), as this helped to camouflage the aircraft ­ particularly when it was parked on a grass airfield. Later on, during 1942, when the white band on the Type A and A1 roundels became narrower, the resulting markings were called the Type C and Type C1. 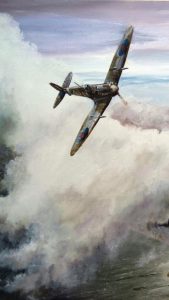 RAF aircraft normally carried two sets of numbers and lettering. The first was the aircraft¹s own individual serial number, which appeared in small black or dark-coloured characters near the tail on both sides of the fuselage. As this related to its date and place of manufacture, this was retained throughout the service life of the airframe, unless one aircraft was cannibalised from the remains of two. The second designation was a much larger three-letter code (very rarely, four letters were used) that appeared in white or light-coloured characters on both sides of the fuselage, straddling the roundel.

These letters were made large and easy to spot so that pilots could identify their fellow aircraft when flying in formation. The first two letters showed which squadron the aircraft belonged to. For example, 257 Squadron used ML from May-June 1940, DT from June 1940-May 1941 and FM for the rest of the war, as the RAF changed the squadron code whenever it thought the Germans had managed to work out which codes denoted a given unit. Not only did this mean that aircraft might be repainted several times during their service life, but also that an aircraft’s markings would be changed whenever it was assigned to a new squadron.

The final letter was an alphabetic code identifying each individual aircraft: A, B, C and so on. So, a pilot belonging to 257 Squadron who was assigned to fly G for George during the Battle of Britain would have taken off in an aircraft with DT-G on its sides. (Squadrons normally only had a maximum of 18 aircraft, so single letters were enough to identify them and in the rare cases that a squadron had more than 26 aircraft, the lettering would start again with AA.)

The only exceptions to this rule were Wing Commanders’ aircraft. These officers were in charge of a Wing comprising two or more squadrons (based on a single airfield, or at nearby ones), and as their own fighter flew with more than one squadron, it could have its own distinctive personal markings. When Robert Stanford Tuck was Wing Commander of the Biggin Hill Wing, he had his initials RS-T painted on his Spitfire. Similarly, the renowned Douglas Bader had the letters D-B when he commanded the Wing flying from RAF Tangmere, while fellow Spitfire ace Johnnie Johnson, based at Kenley, flew JE-J. 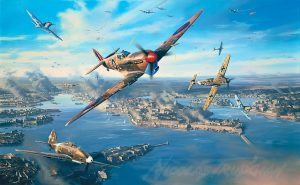