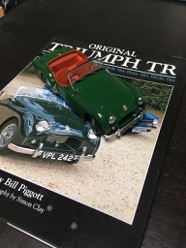 In the years following the end of World War 2, and no doubt with the government’s proclamation  to “export or die” ringing in his ears, Sir John Black, then head of the Standard Triumph Motor Company, wanted a new sports car.

The existing Triumph 1800/2000 Roadster was a curvy and attractive car, but lacked performance and a true sports car feel.

Sir John tried, and failed, to buy Morgan, and so decided to go “in-house” and the company came up with a couple of interim designs that were not deemed to be suitable. Indeed, the “20 TS” prototype, displayed at the 1952 Earls Court Motor Show, was apparently described by development engineer and test driver Ken Richardson as “a death trap”.

Richardson recommended a number of significant changes, which Standard Triumph was able to incorporate into a new design with surprising speed, helped by the fact that many of the parts to be used were already utilised on other, less glamorous Standard models. By mid 1953 three TR2 prototypes had been built, and the car had been displayed at the Geneva Motor Show in March of that year. The new car had (for it’s day) brisk acceleration, and was able to reach 100mph whilst retaining very economical fuel consumption. It was powered by a four cylinder, 2 litre “wet liner” engine from the Standard Vanguard. Those who are not big fans of Triumphs (i.e. MG enthusiasts!) will tell you this engine started life in the Ferguson tractor – even suggesting that “TR” is an abbreviation of TRactor – there are certain design elements that link the power plants, but they are not the same engine!

Production began in July 1953, slowly at first. Demand grew very quickly, and the majority of the production was exported, particularly to the United States. Competition success, both on the track and as a rally car (including winning, outright, the 1954 RAC Rally), bolstered the car’s reputation for being sporty and rugged and it went on to be a great sales success. Over 8,600 TR2s were built before production switched to the very similar TR3 in 1955.

Having invited/encouraged/cajoled/persuaded lots of you to build 1:32 Spitfires for the club’s first group build, I did not feel I could easily refuse to take part in this one.

As a big fan of the TR series of cars, and in particular the TR4, I was sorry not to find a kit of one of these, but surprised to find a relatively cheap kit of the TR2 on eBay.

It is by Gunze Sangyo of Japan – who I only know as a producer of model paints.

The kit is well moulded and relatively simple – there is no engine or complex drive train and suspension to worry about – instead there is a basic but essentially accurate chassis.

My major gripe is the vinyl parts – not only are the tyres moulded in this material, but also the seats, door cards and body trim. Whilst the body tub is moulded in white, the vinyl is black and so matching the interior parts of the car to try and show a similar colour was difficult. The easiest option would have been, I am sure, to have modelled a black interior – but I wanted red…

By contrast, the body shell was a joy to paint. I used thinned Humbrol enamel – in the only proper shade for a British sports car – British Racing Green! 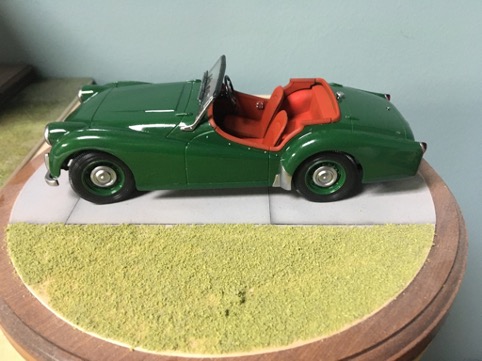 The paint went on remarkably well and produced a lovely glossy finish – indeed probably too glossy for a scale model.

I needed to re-paint the chrome parts – not only was the kit chrome really, really shiny, but also the connections to the sprue meant that the factory finish was lost in very visible places where the plastic had to be cut. I used Tamiya gloss black as a base coat followed by Alclad chrome – it has not come out quite as shiny as I would have liked but I think it is still better than the kit finish.

The kit is pretty accurate – the shape of the body certainly looks like a TR2. The seats are not quite the right shape, but most of the other details look right to me.

A black rimmed steering wheel. (The kit item is a pretty good representation of the standard factory item. It also provides a separate hub and rim for those insane enough to try and make their own with the 12 wire spokes that connect the two.)

Removable side screens or curtains (that are stored in the boot, like the hood, and hence not modelled).

Bright wing beading.
Chrome bonnet and boot hinges.
External door handles.
A boot handle (the kit provides one but I cut it down to represent the lock).
Rear orange indicators.
A fold away hood behind the seats.
T R I U M P H badging on the front or back.
Many of them are also devoid of wing or door mirrors.
Wire wheels.

This was a quick (especially by my usual standards…) and enjoyable build; it was good fun to put some new techniques to the test. But I think it’s back to the planes for me…