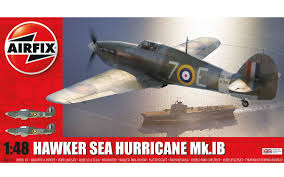 I’ve always been a fan of the Hurricane. It’s rugged looks and reputation as the aeroplane that really won the Battle of Britain are big attractions. For me, of course, the naval version is the most interesting of the lot – so although there are one or two Hasegawa kits still lurking in the stash, when Airfix released it’s new tool version as a Sea Hurricane in 1:48 I couldn’t resist.

My plan for this one was to model a Sea Hurricane Mk 1a – essentially these were ex RAF machines that were passed to the Admiralty with minimal modifications – so it won’t have an arrester hook.  What it will have is my favourite Sea Hurricane scheme – Extra Dark Sea Grey and Dark Slate Grey over Sky Grey with a sharp demarcation line about half way down the fuselage – I think these colours are usually referred to as scheme “S1E”. There is some debate about whether this scheme ever existed on the Hurricane – the lower colour could be Sky – but I have a (black and white) photo that looks like Sky Grey to me and I have profile and a decal scheme with these colours on it so that’s good enough for me.

So let us begin…

Contrary to the instructions, reviews I’ve read suggest that gluing the spars to the lower, full span wing, is a good idea and so this is what I did. Some care is required to make sure that the spars sit properly in the recesses moulded into the lower wing – again reviews suggest that if they are not seated properly then the upper wings don’t fit. 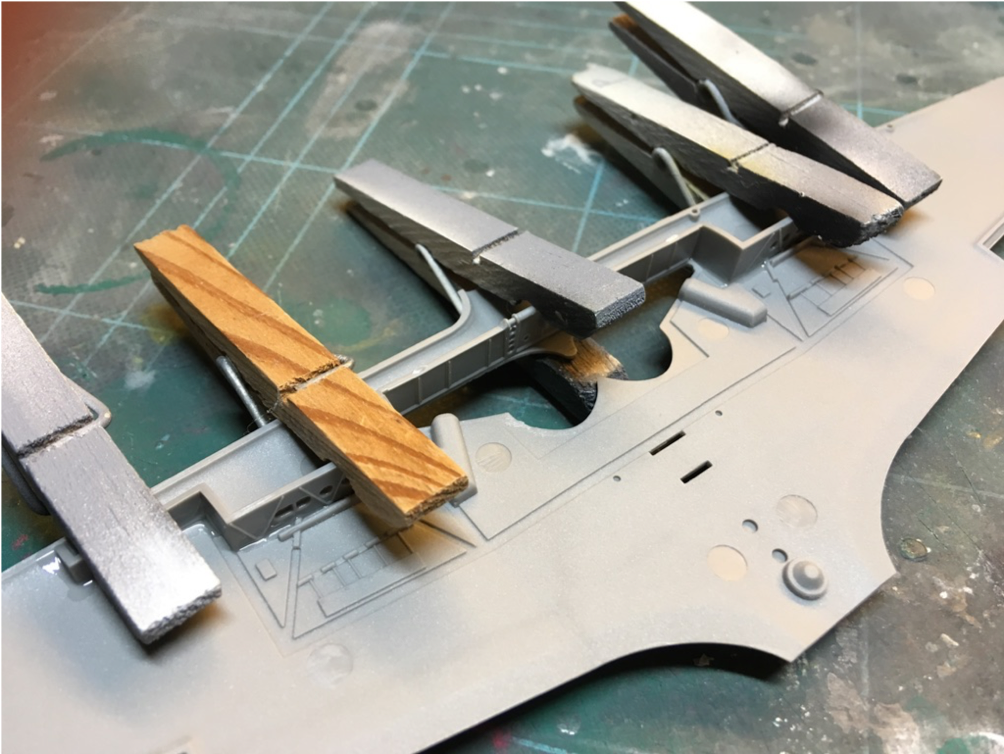 The cockpit is built up onto these spars, and a nice looking rendition of the tubular structure of the Hurricane, with the armoured backplate, footboards and control column is the result.

More internet research suggested that the seat, tubular framework and sections of the interior were silver, with green for the armour and panels on the sidewalls. I didn’t fit any harness, as I was planning to instal the pilot.

Before joining the fuselage halves, I painted the instrument panel and added the very good decal. It needed plenty of setting solution to confirm to the raised detail – but looked great once in place. There is also a bulkhead/firewall forward of the cockpit that fitted very neatly into a slot moulded into the fuselage.

The fuselage halves went together very well – with almost all of the underside being attached later as separate parts it was not the most rigid of structures – but the fit was good. 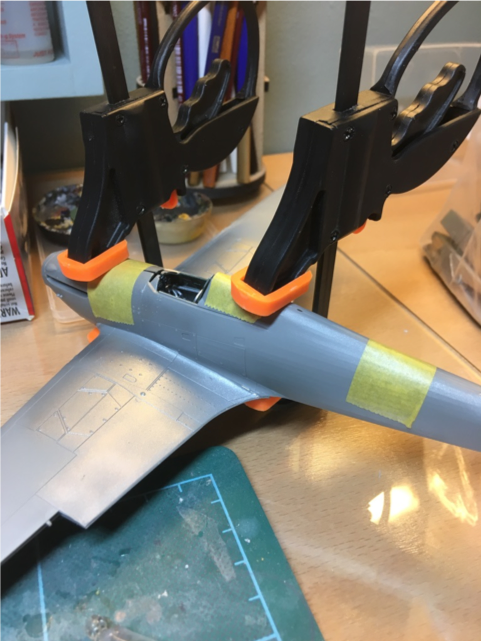 And then my troubles began… 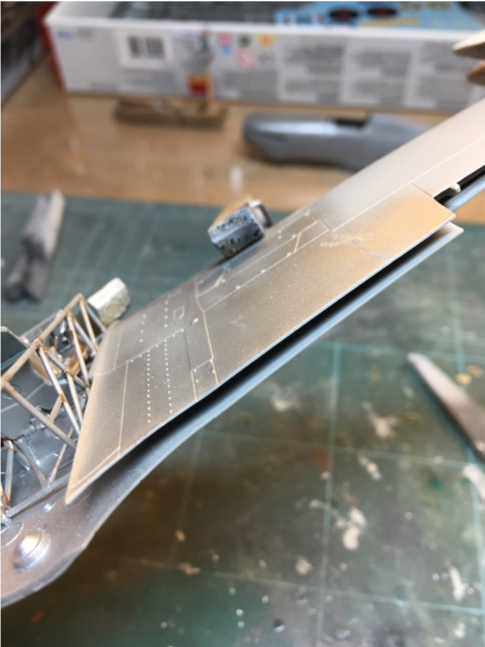 First, the fuselage is supposed to drop over the cockpit and onto the lower wing. I’m not sure where I went wrong, but the two did not want to go together. Something in the cockpit, or perhaps the front bulkhead, was preventing the fuselage from sitting down onto the lower wing. If I joined the two at the front, there was a massive gap at the back, or vice versa. It was as if the fuselage halves were too narrow, and the cockpit framework would not fit inside. There was much creaking and groaning from the plastic as I tried to cajole them into place. Eventually I had to break out a couple of clamps and force the issue – which popped open the top fuselage seam ahead of the cockpit by about a millimetre and made the fuselage too wide where it meets the leading edge of the wing. Filler and sanding helped to restore the situation, but some detail was lost and I was worried the windscreen might not fit over the widened fuselage…

Thinking I could move quickly on with fitting the upper halves of each wing, my best efforts to seat the spars correctly were clearly in vain, as the fit here was awful as well. The spars were either too tall, or the upper wing parts not sufficiently curved to allow then to meet the lower wing at leading and trailing edges. Were I building the kit again, and, like this one, not displaying the gun bays open, I would cut the spars much shorter in the hope of avoiding this problem.

Out came the clamps again, and with force duly applied I have to accept that the wing did follow the curve of the fuselage at the root quite well – although the trailing edge is very thick by modern kit standards.

Also less than perfect were the deep sink marks on the fillets where the tailplanes join the rear fuselage, and smaller ones ahead of the cockpit.

I fixed the various control surfaces to complete the basic airframe, and it was time to add some colour. 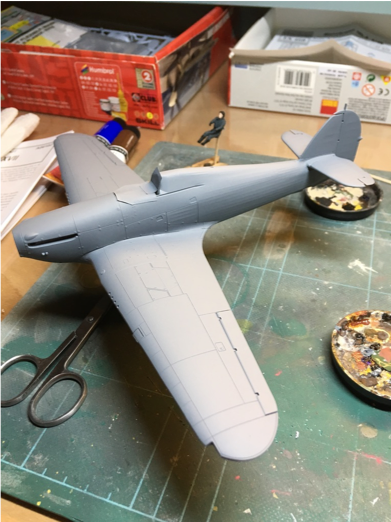 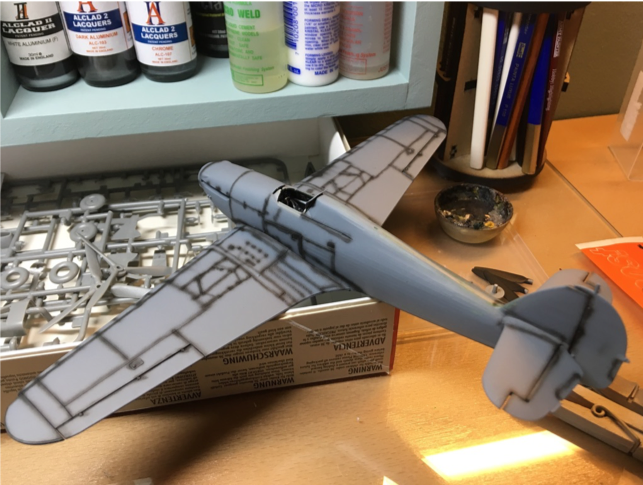 First I primed the model using The Army Painter “Uniform Grey” straight from the rattle can. I am a sucker for pre-shading the panel lines – I think it looks particularly effective under light grey – so that was the next step.

A coat of Tamiya XF19 Sky Grey, thinned with their own product, came next. I like to try and apply several light coats, so have stuck to a ratio of about 50:50 paint to thinner.

Once happy with the grey, the masking tape came out and I covered off the lower half of the fuselage and other underside areas that might be vulnerable to overspray.

For the upper surface colours I used the Vallejo brand, from a Coastal Command set that has the ubiquitous Extra Dark Sea Grey and Dark Slate Grey included. I thinned these with “flow improver” – also Vallejo – as in the past these paints have tended to clog the needle of my airbrush. As with the light grey lower surfaces, I aimed for a gradual build up of density via several light coats, allowing some of the pre-shading to show through. For the softer demarcation between the two upper colours, I used the “Blue-Tak sausage”

I assembled the radiator housing – again the fit to the belly was less than stella – I had to use another clamp to hold the assembly in place – cracking the joint between the front and rear parts in the process. This kit felt like it was fighting me all the way…

In readiness for applying the decals, I coated the model with “Klear” floor polish, sprayed through the airbrush. For the decals themselves, I used the kit markings for the stencils and all the roundels and fin flashes – these behaved very well and settled nicely into the panel lines with the help of some Micro Sol. 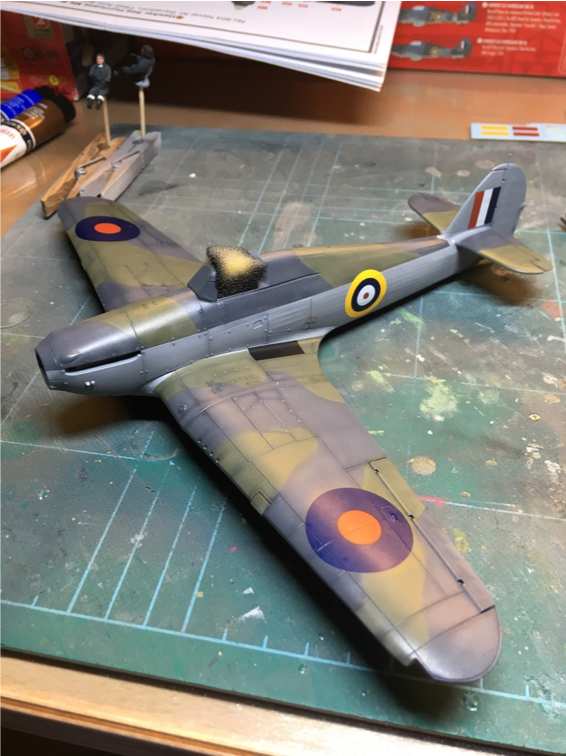 For the serial number I used a sheet of generic letters and numbers from Xtradecals – invaluable for building schemes that are not “out of the box”.

Final assembly was relatively straightforward, especially by comparison with the earlier issues. The wheels/tyres are, in my view, a little large in diameter. I also had to repaint the area around the base of the fin as, looking at my reference photo, the way I had initially done it was clearly wrong.

The same photo also revealed that this Hurricane did not have the small De Havilland spinner and narrow chord propellor, but rather the larger, pointed Rotol type with broad chord props. A quick call to our friendly local model shop and a Quickboost resin replacement for the kit part was on it’s way.

I drilled and carved out the ends of the exhausts and made an aerial wire from some elasticated thread from Uschi.

Final weathering was done with a panel line wash, using Flory Models “Dark Dirt” and pastels for the exhaust stains. 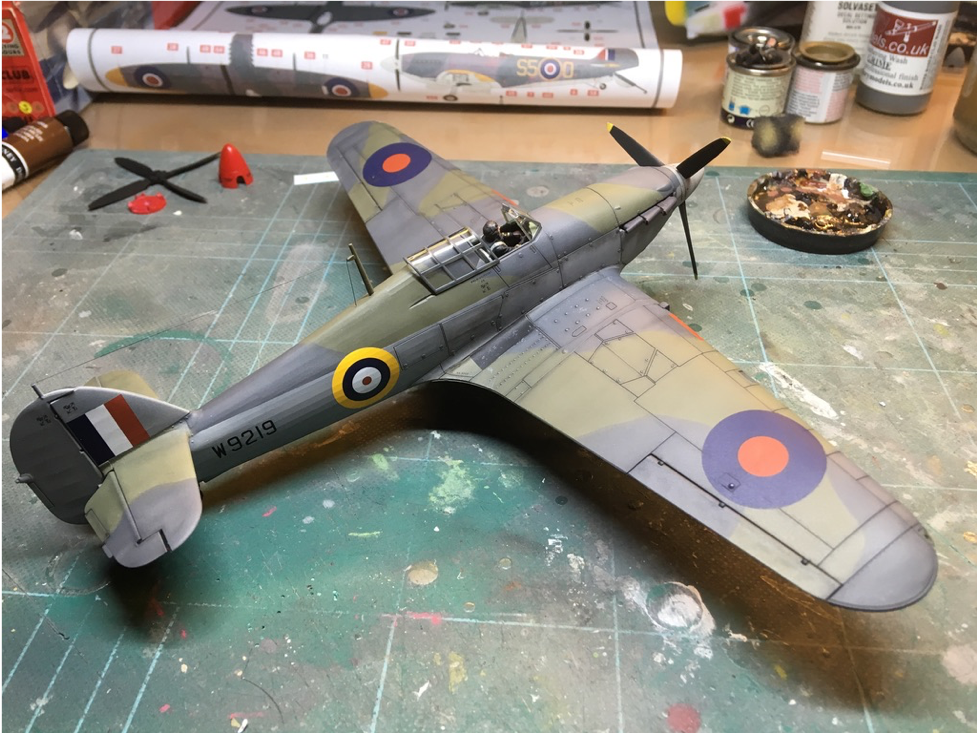 I painted the pilot using Humbrol enamels – apart from the face where the best I can manage is a combination of Vallejo “Flat Flesh” washed over with their “Flesh Wash” product to give some highlights and shadow.

And so I now have a Sea Hurricane in the display cabinet in the scheme I love. It certainly looks like a Hurricane to me, and I will defiantly build another one of these Airfix kits at some point in the future – if for no other reason than to see if the difficulties in construction repeat themselves – others have reported the kit as almost falling together… Will I be selling off the Hasegawa ones in the stash though?