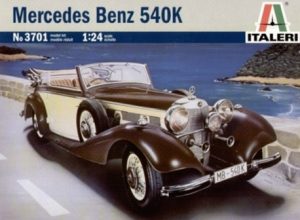 With so much to choose from in 1/24 scale, be it modern or old, car, lorry or bus, military or civilian it soon was apparent that the difficult part of committing to the Group build would be what to actually make.  I therefore hope to build more than one entry to the build as I have more than one kit in mind.   As time is a privilege that Group builds have I decided my first build would not be just an out of the box build but something that involved a bit of digging.

Italeri have had a Mercedes 540K in their range since 1976. The real thing was a lovely car in its day that has become a classic in lines and performance now.  Even when built in 1936 it had an impressive turn of speed able to notch up 110mph.

What I found interesting was the number of cars pressed into use during WWII or indeed gifted into service.  I’d already done some research when making the Citreon 11 in Luftwaffe service for my previous group build so was aware that the Mercedes 540 had been issued to high ranking officials in the German Military.  Not a big car it was more of a prestige piece with Herman Goring having two versions of the 540. One the, roadster would be captured by US forces, the other 540K which is the same type as modelled by Italeri was used by him on his wedding day and photos can be found of it decked in flowers and in a highly shined black finish.  I wanted a more utilitarian look and lucky for me found at least 2 examples in use closer to the front line.  I compared number plates and know  photos representing 4 separate vehicles exist but have a collection of downloaded pictures that would suggest 6 different 540ks appear in pictures.  It is only being unable to see the VRN on all the pictures that make it impossible to state for certain it is not the same vehicle.  It is therefore likely a lot more 540Ks saw service that didn’t get photographed. These facts made me confident I could carry out a conversion with some degree of accuracy without resorting to an aftermarket kit.

After Goring the next most famous user of the Mercedes 540K would be Field MarshalWalter von Reichenau .  A gifted commander but also a severe and ruthless Nazi.  I had some clear pictures of his car but his notoriety meant I didn’t fancy replicating his personal vehicle. Some of the other positively identified vehicles lacked any really defining features, looking like pretty standard cars with dark grey or black paintwork but keeping some chrome parts.

It was to the Russian front that I turned and found some of these prestigious autos in service in less than suitable conditions. By combing a variety of picture that showed differing vehicles but from different views I drew up a list of modifications that had appeared at least once on the cars.  But that is for when the build starts IN 2021, for now a picture to whet the appetite. 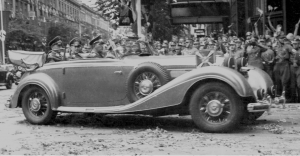