For our second club night of July, about a dozen members attended at Dennis Marsh House to enjoy a bit of a chat and show off their latest models; finished, in progress and still in the box. We were pleased to welcome back Roger Alexander, who came to a club night or two a while back – hopefully to become a regular attendee?

As Richard was sunning himself in Malta, Nick chaired the meeting and reported on the Romsey Show which he, Chris and Dave attended last Saturday – and where Sibo was also in attendance in his “professional” capacity.

The feedback was that this show, whilst small and with a distinctly “village hall” feel to it, was very enjoyable and the quality of the models on display was high. Less people creates more time to chat and to learn about and/or explain models and techniques to visitors and fellow modellers alike. Chris has agreed to write up a report on the show, so I will leave further comments to him – but I did enjoy the bacon sandwich…

Getting back to our club night, Mike was able to report on the North Somerset show that he manfully attended on his own – his photos of his display reveal that he made a real effort to maintain the Salisbury tradition of a varied and interesting selection of models, and I gather that the feedback was good.

Likewise, Brian R attended the Durrington show alone. He reported that setting up and dismantling the display on his own is hard work – perhaps next year one or more of us can be persuaded to join him? Although I didn’t see any pictures, I have no doubt that he will have put on a good display of models.

The next two shows are Avon (5th August 2018) and BDAC at Old Sarum (12th August 2018). I think Richard already has a list of those who are planning to attend and display at each, but for the avoidance of doubt, of those of us here this evening, Mike, Dave (who needs a lift) Mick, Bill, Roger (and Don, who wasn’t with us this evening) are all planning on attending Avon; whilst Brian R, Dave, Steve and Roger are planning to attend BDAC.

On display this evening from the members were: 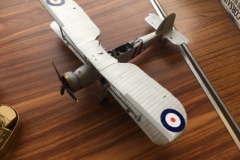 Chris also showed off his increasing liking for, and skilled painting of, figures with this impressive bust/torso (whose name escapes me…!): 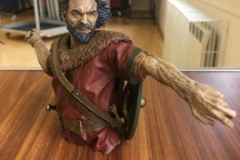 Todd had a 1:48 Hasegawa Vought A7 Corsair work in progress, including painted orange markings, from (I believe) a 1972 Vietnam War timeframe. 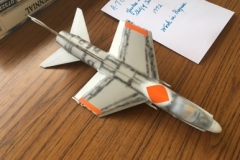 Brian continues with his passion for all things Israeli and armoured – with two Centurion based AFV’s, one fully painted and weathered, the other in primer: 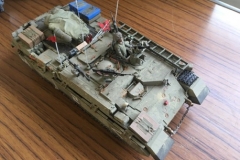 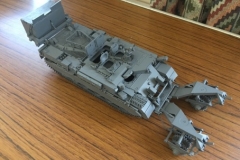 Dave brought along the new Airfix 1:72 Wellington, on which he is making good progress and he reported the kit to be excellent.

And bringing up the rear, so to speak, who else but Mike would bring along a figure like this? 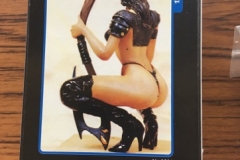 We concluded with a reminder that the next club night, on 7th August, has a theme: “Captured”; and I threw down a challenge for any club member to be able to confirm the colours in which Sea Fury T20 serial number VX301 was painted whilst on loan to Ferranti – in particular the wing leading edges and what appear to be stripes that wrap over those wing leading edges… (see photo below). 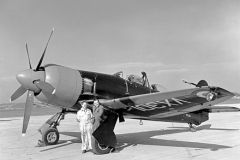 Chris volunteered to try and sort out a BBQ for the club this year – he will speak to Don about the equipment and look to confirm a date – hopefully one of the club nights in August.