What a weekend, we had it all, great venue, two days of talking models and torrential rain, what else would you do on a weekend in October?

Two days to wander around the Tank Museum, not everybody’s cup of tea, but for those of us who like are tea NATO style, it was.

Not as busy as previous shows, I suspect it not being a bank holiday weekend might be the reason. Nevertheless looking around the museum there was a steady flow of people, looking at the tanks as well as the display stands.

We were again in the Sherman Suite, a bit out of the way, so foot fall was very small, also the lighting was very poor, we managed to get the area around the table lit fully for about five minutes, but then it dimmed and that was that. We brought in some lights of our own for the Sunday which made a huge difference. 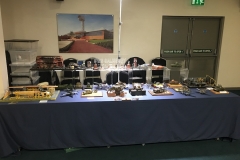 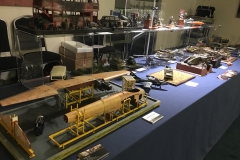 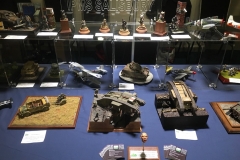 We had two teams who shared the weekend, Richard, Don & Ray on Saturday, then Richard, Todd & Chris on the Sunday.

Both days the table was resplendent in modelling goodness, a feast for the eyes and certainly a lot of interest.

I am making a video of the weekend from the footage I took, and will post soon.

A great weekend, but not sure about doing two days in a row again.

Hats off to the Tank Museum for opening their doors, yet again to us plastic/resin guys.