The annual Air Cadet competition for squadrons in Dorset and Wiltshire, known as Wing Activity Day or “WAD” includes modelling as one of the categories. Each year a particular kit is nominated for the “set model” – one class for adult staff members, and one class for the cadets. The models have to be built strictly “out of the box” – no aftermarket is allowed – using the kit decals and with the undercarriage down. Several of you will already be familiar with the competition, having kindly organised the event or volunteered to judge the entries.

And so it is that I find myself departing (again!) from my preferred 1:48 scale Fleet Air Arm subjects to have a go at Revell’s 1:72 Spitfire Mk Vb – the 2018 WAD “set model”. Thinking that, if I’m going to build one little Spitfire, I might as well build three, I also dug out the two Airfix Mk 1 kits I have in the stash, to compare the merits of each… 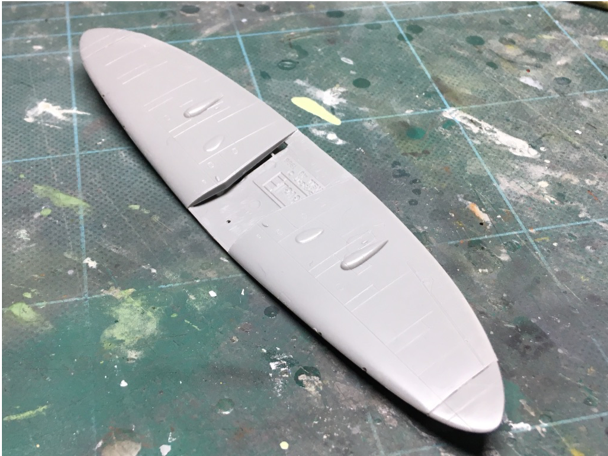 On opening the box, two things are striking about the Revell kit, one good, the other bad. On the plus side, the surface detail is really nice. The panel lines are very finely engraved and look just right for this scale. A major detraction, however, is the complete lack of any attempt to portray the distinctive “gull wing” curves of the Spitfire where the trailing edge of the wing meets the underside of the fuselage – the kit’s centre section is almost completely flat and most un-Spitfire like. There are two schemes – both in the dark green/ocean grey/medium sea grey colours. The only option is that one airframe has the clipped wingtips, the other the more familiar full span elliptical form.

One of my two Airfix kits was a starter set – meaning no optional parts; only the main markings for a single scheme provided on the decal sheet (no stencils, gun patches etc); and an end opening box. The other is the “mainstream” version – a top opening box, optional parts including the early two bladed propeller and flat canopy, and a full set of decals with options for two different schemes. The engraved detail looks much heavier than the Revell kit – typical of more recent Airfix releases – and rather out of scale for a 1:72 model. 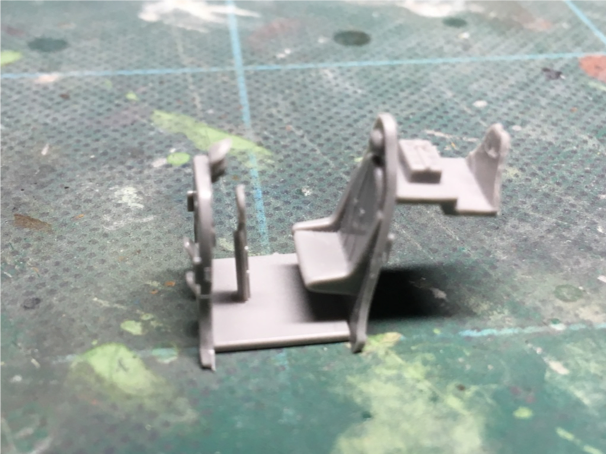 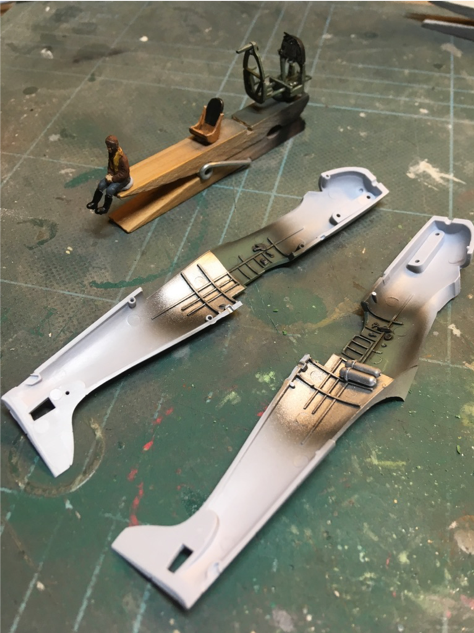 More differences become apparent as construction begins. The Revell cockpit is basic. It features an un-prototypical solid, flat floor and a rather shallow looking seat moulded as part of a solid rear bulkhead. Behind the pilot’s head is more fiction – a flat section with a “black box” on it. There is no pilot; but there are belts moulded into the seat back and there is raised detail on the instrument panel to give you the option to paint it if you don’t want to use the decal provided.

The Airfix cockpit looks much more like the real thing – a front and rear framework, the front including the instrument panel and the rear the mounting brackets for the seat. Connecting the two are the control rods from the rudder in a more open structure. The instrument panel is featureless – you have to rely on a decal (or upgrade to an etched or resin replacement) for the detail. Airfix give you the option of manning your aircraft – I decided to include the pilots in both; partly to avoid spending money on etched brass harnesses and partly to hide the rather thick edges to the kit seat. The Airfix cockpit being more accurate in not hiding the space behind the seat, they also give you the two (oxygen?) bottles that fix to the port fuselage side in this space.

For all three kits I followed my usual practice of spraying the cockpit components black, before then going over them with Tamiya’s Cockpit Green. For the Airfix kits I masked off the green, and sprayed the areas behind the seat silver. A wash of thinned oil paint and a dry brush with a very pale beige and the details were nicely highlighted.

The interior of the Revell kit fitted inside the fuselage halves without problem. The more fiddly Airfix cockpits were another matter – I struggled to work out how the two bulkheads were supposed to fit to the fuselage sides (my mistake – there’s a perfectly clear diagram in the instructions…) It looked like it would be very difficult to get the fuselage closed around the cockpit. In the end I decided to abandon the suggested construction sequence and glue the fuselage together before fitting the cockpit from underneath. It turned out that the instrument panel was a little wide and needed sanding down to get a decent fit. I also found that the locating pins on the Airfix kits were actually a hindrance to a good fit as they seemed too large for the holes they are supposed to fit into and so I sliced all but one (the cowling below the engine) off.

The wings, tailplanes and rudder of the Revell model also fitted together very well. Some filler was needed on the seam along the top of the nose and at the aforementioned join of wing trailing edge and fuselage – where the plastic was very thin and almost seemed “short shot”; but generally the fit was good. The wingtips (I decided on the full span option) required a bit of care to try and ensure that they followed the line of the wing and blended in as smoothly as possible. I test fitted the clipped tips too and they were much easier. 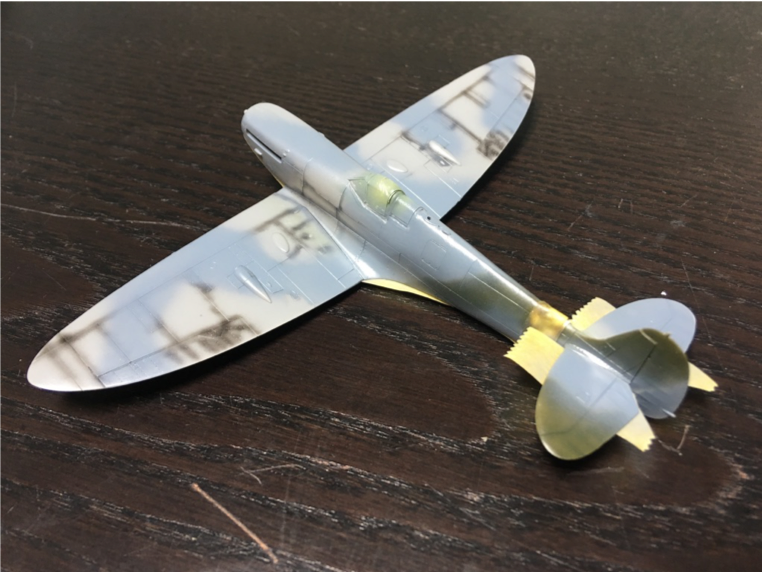 With the Airfix kits the main components fitted together very nicely. Only a small amount of filler was used to hide the seam along the top of the nose.

I painted the Revell kit first. Following my tried and trusted methods, I pre-shaded the panel lines in black before moving on to painting the Sky fuselage band and masking this off. Then it was on to the medium sea grey undersides. For this colour and the ocean grey on the top I used a set of Akan acrylic paints (from our most excellent local model shop…) specifically for this scheme. I tried to freehand the dark green, but, especially in this scale, I could not create a fine enough border between it and the grey. I also did not like the shade of green – to my eyes it looked like it had too much yellow in it – so I broke out the Blu-Tak and my Tamiya dark green and this produced a result I felt much happier with.

After the main colours were complete, I masked around the the leading edges and painted them first white and then yellow. After a coat of Klear the decals went on with the help of some Micro Sol – unusually this had the effect of attacking one patch of the underside grey – but it was only a small area on one wingtip and I was able to touch up with a brush. The decals were a little thick and did not “snuggle down” quite as fully into the panel lines – not helped by the lines being so fine in the first place. I also applied the upper wing roundels over the top of the black walkway lines – which I think is correct – but it left two rather noticeable ridges across the roundels – I should have cut the walkway lines to length around the roundel… 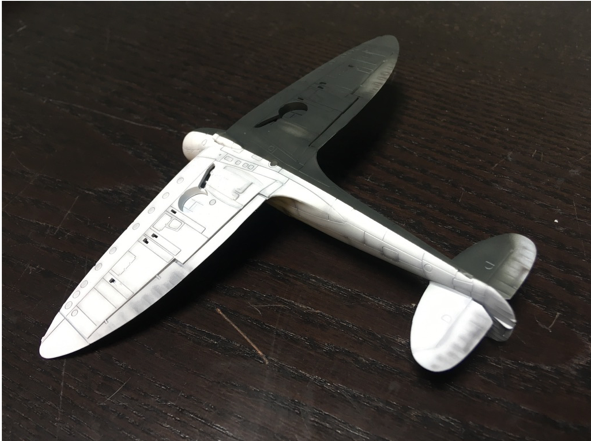 The details parts fitted well and, with a panel line wash, some pastel exhaust stains and coat of matt varnish, soon the kit was complete. Looking at it in its finished state, I feel that the windscreen is perhaps a little too raked, and the spinner is definitely not quite the right shape, but it looks like a Spitfire and I’m quite pleased with the result.

Similarly, for painting the Airfix pair, I pre-shaded the panel lines and stated with the undersides. For the earlier of the two schemes, this meant the half-and-half black and white, with silver control surfaces. I used Tamiya acrylics for these and, for the black, their Nato Black allows some variation to the panels.

For the second scheme, the underside is Sky, save for the port wing, which is black, and so a similar technique was used.

Being earlier machines (Mk I’s, as opposed to the the Revell Mk V), the upper surface colours were Dark Earth and Dark Green. 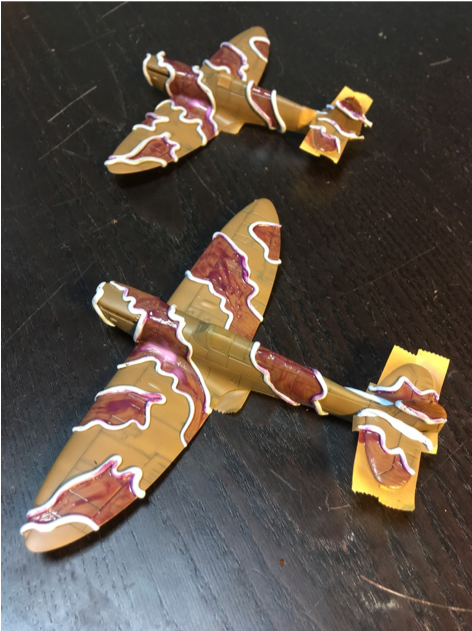 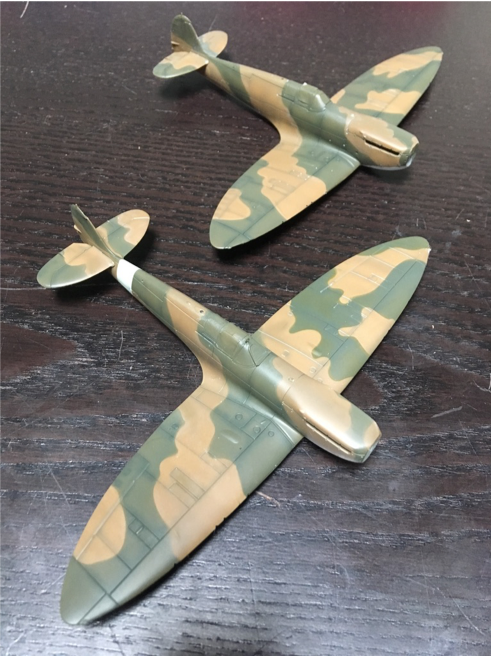 I started with the Dark Earth – Vallejo – and painted the whole of the upper surfaces to avoid any gaps between the camouflage colours. Then it was out with the Blu-Tak again and more sausages to create a nice tight, but not totally hard edged demarkation between the colours. Looking at the instructions, the pattern seemed very “squiggly” and so I tried to twist the Blu-Tak into various sharp curves and twists to reproduce this. Rather than trying to mask the Dark Earth with dozens of tiny pieces of tape, I used Humbrol’s Maskol instead and this worked well and certainly saved a few hours of tedious work cutting up tape.

As I was now spraying the green over the brown, the pre-shading effect was rather lost under the two layers, and so after the first coat of green (again I used Tamiya Dark Green), I added a little Nato Black to the colour cup of the airbrush and went over the panel lines, just to make the finish more consistent between the two colours.

Removing the masking is always a satisfying moment, but I was a bit frustrated that a new pack of Blu-Tak seemed to be of a particularly soft and chalky texture, which left a residue on the surface of one of the models. I have read that White-Tak is the way to go, so will try this next time…

Decals went on nicely over a coat of future – as the panel lines are deeper on these Airfix kits the decals did seem to settle into them more easily. Such is the depth of the panel lines, however, that I decided not to apply a panel line wash – the pre and post-shading seemed to be enough.

The tail-wheel leg on the Airfix kits seems to be too large to fit into the slot provided under the rear fuselage, and had to be trimmed – otherwise the detail parts, including the distinctive two bladed propellor, flat canopy and pole antenna mast of the early scheme, all fitted well.

Comparisons between kits usually end with a verdict, so here is mine…

Whilst the Revell kit goes together nicely, and the surface detailing is very refined, the lack of curves around the lower trailing edge of the wing is a problem that cannot be remedied without drastic (I would say almost impossible) surgery, and it’s a pity the cockpit is inaccurate and the spinner is not quite right – although these could be resolved more easily with after-market items.

Airfix have always been good at Spitfires – they must have sold millions of them by now – and these are no exception. Dave B tells me the windscreen is a little wide – and I think he’s right – and the panel lines are a bit heavy. They are also not quite as easy to build as the Revell version – but once finished they really look the part to my eyes and so I would rate them as the better of the two kits. 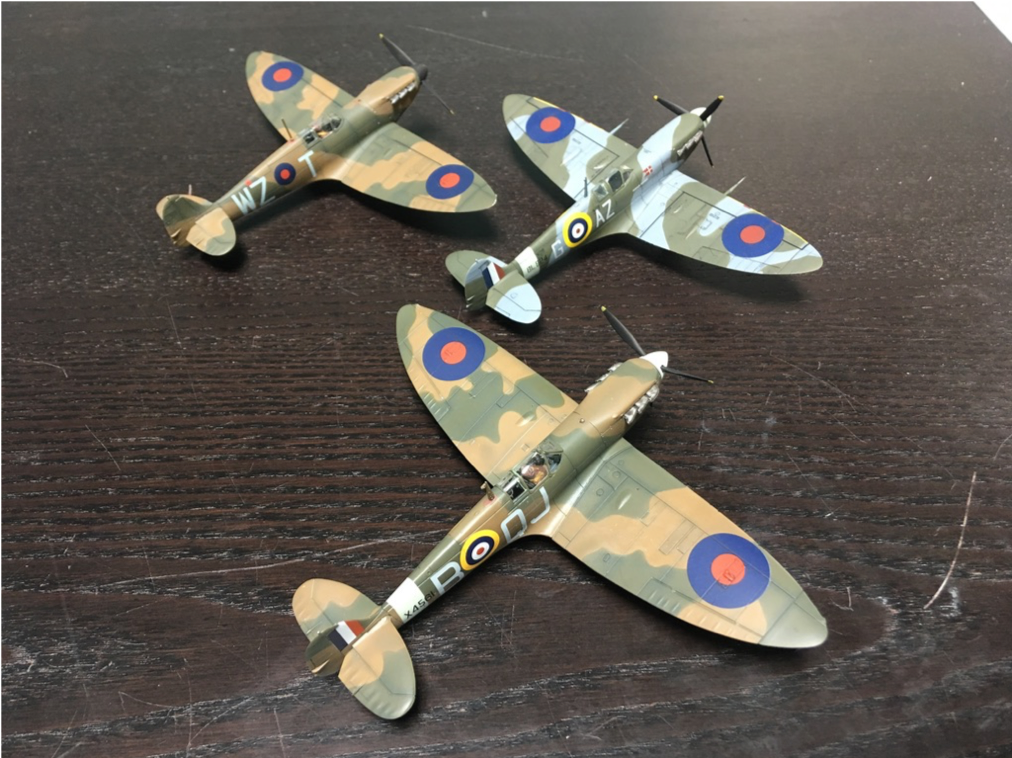