After some very heavy rain days before, Saturday turned out to be a nice sunny day, and what better way to spend it then at the South West Model Expo held at the Tank Museum.

Richard and Ray made their way down, 6.30am start, clear roads and making good time arrived at 7.20am.

Registration done, they made their way round the back of the museum to the loading doors for the Tank Story Hall.

Negotiating the mud, lucky Richard had brought along his trusty “festival trolley’, models and display stand were deposited in the hall, and before long the display stand was up and ready.

Then Mick arrived…. They were not expecting him, having had a casualty the week before, Richard had phoned around and Ray said he would accompany him, so it was a surprise when Mick turned up laden down with models. A quick rearrangement of the table, a few models made their way back into boxes, never to be seen, they made room for Mick’s unannounced arrival. 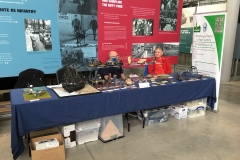 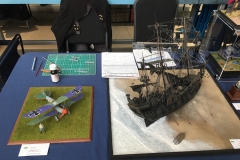 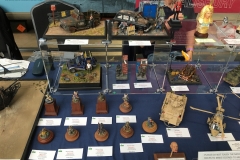 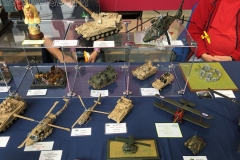 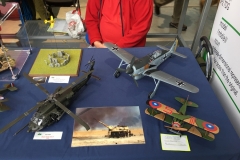 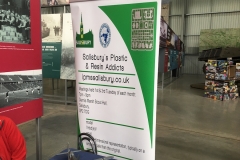 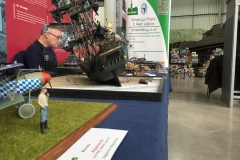 The club’s banner was in full view of the walkway leading down into the hall.

Lots of people stopped for a chat and admired the models on display, even some previous members popped over to say hello. Ray met up with some old forces mates, so we lost him for a couple of hours.
Some new members were recruited, so hope to see them at a club night very soon. Purchases were few, looks like folk are saving up for the Nationals in Telford in November.

Richard brought along a 1/35 scale MiniArt wagon to build, wonder what this will turn out to be in the coming months?

All in all a good day. The show was over the weekend, but we decided that one day (Saturday) was enough, hopefully the organisers will do the same next time.

Our next outing will be to Yeovil on 26th October (Rugby World Cup Semi Finals permitting for some of us).