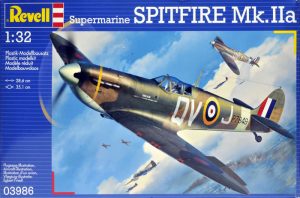 Initially I wasn’t planning on joining in the IPMS Salisbury 1/32 Spitfire group build but as so often happens a chance finding of an old picture got me interested.

It appears that during combat Spitfire N3277, AZ-H of No.234 Sqn was caused to force-land near Cherbourg  on 15 August 1940. Flown by Pilot Officer Richard Hardy, his Spitfire nick named ‘Dirty Dick’, a Mark 1a, was immediately captured by the Germans. Contemporary pictures show it had some damage just behind the cockpit which was repaired so that the aircraft could be taken over and tested by the Luftwaffe at Rechlin. It is reported that later in the war N3277 was re-marked 5+2.

The exact details seem to vary, some references state that N3277 and 5+2 are different aircraft and that N3277 went on to be re-engined with a Daimler 110 engine. Also the damage shown in the picture immediately after forced landing is often cited as caused be the pilot destroying secret equipment and radios, but is more likely to be from a 20mm flak that opened fire as the Spitfire crossed the coast on its way to landing. 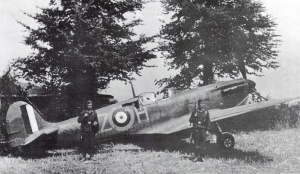 N3277 can be seen (to the left) and it is clear in the second picture, the damage has been repaired and over painted crosses added. To my eyes it appears that the underside is still Sky type rather than the yellow that was common on captured aircraft and is how Oxford diecast presents their 1/72 scale model. As this colour was so often seen on all types of captured aircraft I would surmise it was added later, perhaps the unit located near to where N3277 landed had only white and black paint? Other pictures show the logo ‘Dirty Dick’ still present after this first paint job but possibly later. I’d expect the Victory V sign over a broken swastika that was painted below the canopy to also have been painted out as the airframe went back for higher authorities’ inspection. This airframe will become my project which allows me some latitude in the exact finish. I’m starting out with Revell’s 1/32 MkII kit. Minimal aftermarket additions will help keep the cost from spiralling. 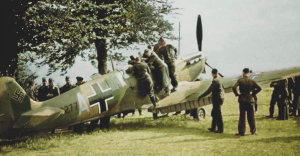 Sibo’s Journey will be revealed below: