Richard & Dave made their way to Gloucester on a sunny Sunday morning heading for the IPMS Gloucester Model Show.

This is a pleasant show, handy having a burger van outside, not the main reason for going, but they are nice burgers.

Arrival was 8.10am, an easy drive up, little traffic, so they made good time.

Setup done they waited for the doors to open to the public. 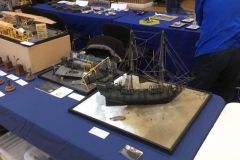 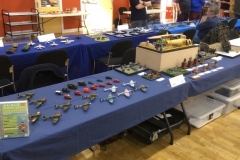 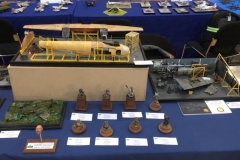 The show was spread over three halls, Salisbury was in the main hall along with some top traders. 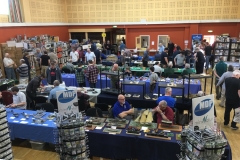 Richard pickup the final three figures from the Tail Brotherhood series from the   MDP stand.

Furdo, Radacrunch the Brown & Lord Elrodent (you can see the ones he has made so far on his website Rust N Stuff)

Richard’s Revell “Black Pearl” was a draw, much admired by all who stopped and looked at it.

As always, plenty of interest in our table, Dave’s mini models of british service vehicles had a lot of interest, particularly from some who had driven the real things.

A great little show, pity the foot fall wasn’t high, must have been the sunny day, but those who came seem to have great time.

The next show will be our own Annual Model Show on Saturday 1st June – Click Here for more info.