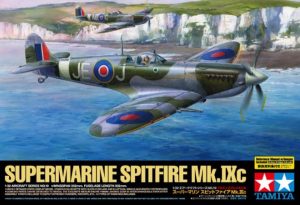 So now I find myself genuinely excited to be about to make a start on a model that otherwise might have languished in the stash and never seen the light of day.
As mentioned here, my kit is the Tamiya Mk IXc – and my initial thoughts were that I wanted a scheme that was “interesting”, preferably with the full span rather than clipped wings and using the pointed rudder.
Such an airframe proved hard (impossible?) to find.
I scoured Hannants website for decal or masking sets that fitted my criteria, without success.
A few weeks ago (at about 3:00am one morning  😯 ) I suddenly remembered that, in a 1:48 decal set I had for Airspeed Oxfords, there had been one “bonus” scheme for a Spitfire in a training unit with yellow painted areas on the fuselage – but was it a Mk IX? A quick look in the decal dungeon revealed it was. 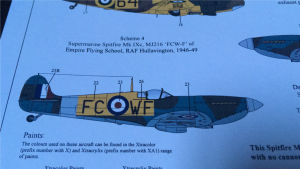 Spitfire MJ216 is shown in service with the Empire Central Training School at RAF Hullavington, in about 1944. It fulfils two of my three criteria in that it wears a non-standard paint scheme and has full span wings; but not a pointed rudder, sadly. A little internet research suggests this Spit was originally built at Castle Bromwich in October 1943, and that by September 1949 she had been sold for scrap.

Interesting features of the aircraft include: 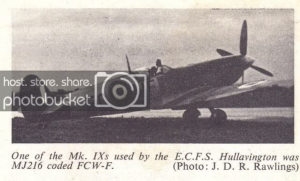 My plan is to build the aircraft as if the pilot is just about to start the engine – with a mechanic leaning over the cockpit and a trolley accumulator plugged in. I will not, therefore, be exposing or super detailing the engine.
I have gone to the after market to replace the vinyl tyres that Tamiya provide, and the cannon bulges on the wings; also for a pilot and mechanic (although Tamiya do provide a very nice pilot, I liked the PJ Productions figure in his white, roll neck jersey!) I have also bought a 1:32 trolley accumulator.

Roll on 4th February and we can make a start!

Nick’s Journey will be revealed below: